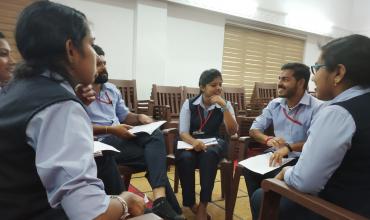 I was watching a talk show in Youtube last week. The gentleman in the show was narrating an incident his friend had in a mall. This lady, his friend, had her 7 month old baby in a pram with her and was waiting to get into a store. A little seven year old came upto her and said “Excuse me ma’am, I just want to tell you that I like looking at your baby”. She was pleased to hear that and thanked him. He continued the conversation and asked her, “what is your baby’s name” She told him “Shilo”. He spoke to Shilo . He said, “You know Shilo I also have a baby cousin like you”. The lady said that the ice cream he was eating looked good. He said “Would your baby like some ice cream” He gave the location of the ice cream counter. Then he said “It was nice to meet you and Shilo” and left with a smile.

Though she was busy then, she was delighted to converse with him. She was telling her friend, the gentleman of the talk show that this boy started the conversation with an ‘excuse me’ and only after she turned to him, did he go on. He addressed her and Shilo both. Once he knew the little girl’s name he used it to address her. He tried to be helpful and sharing. When he shared the location of the counter for the ice cream he pointed and described where it was and checked to make sure that she had a complete understanding of where it was. He shared a bit about himself but let the subject of the conversation be more about the people he was talking with. Then instead of abruptly ending the conversation and walking off like many kids do, he addressed both of us again in his good bye. She was impressed. Well, who won’t be impressed with a seven year old with such impeccable manners? But why is that we don’t have many seven year old or even older ones with such manners. In today’s world a person with good manners can feel like the protagonist from the movie ‘Blast from the Past’.

There is a void in our world today of manners and respect. A lot consider good manners or behaviour as a pretence to gain a good reputation. There are people who behave roughly with their family though they are good with others. That is sad.  Emily Post an American author famous for writing about etiquette said that ‘Manners are a sensitive awareness of the feelings of others. If you have that awareness, you have good manners’. Manners, politeness and respect in our culture are like oil that prevents friction in a society. When we behave that way to each other the problem of ‘overheating’ could be solved. Politeness and courtesy aren’t weaknesses, they are strengths. A polite behaviour always brings a positive response. For instance, road rage is a very common thing now. My colleague, one day while driving had to slow down to take a turn and an impatient driver blared his car horn from behind. Instead of being defensive she turned around and mouthed a ‘sorry’ to him. Instinctively he smiled and waited for her to make the turn. Her gesture actually saved their day. A rude response or comment spoils our day. The Bible says that a gentle answer turns away wrath. But this does not come to us naturally. We have to train ourselves to have good manners.

In the past, manners were given an equal importance as academics. Teachers and parents made sure that children learned to behave well and respectfully. Now a days competition has taken its place. It is about time that we bring back the emphasis on good manners in the real as well as in the virtual world. Schools can play a major role in training their students to follow good etiquettes in the digital world. Disciplining children in the use of internet is much needed. They should be aware that teachers and parents forbid them from going into unwanted websites because that can harm them. When using smart phones and tablets decide whether it will affect the quality of the very important human interactions that are happening face to face all around us. Auto-responses to your device such as responding to a text are hard to curb. Another thing is the use of social media. When using facebook, whatsapp etc respect other people’s privacy, be gentle when you disagree, be polite and considerate. Imagine how beautiful our lives would be when we bring back qualities like courtesy, concern, tolerance, love and respect for each other. It’s part of our culture.

Popularity is the most sought after thing these days. So many offensive and harsh things are said and done in social media and otherwise to get attention even for a few days. It is good to realise that, to be the cynosure is not really the most important thing. Remember the story I started off with, a little seven year old had set such a good example that we are talking about it now. Let’s strive to be good examples to others, especially to those younger to us. This is one thing that is much needed in our society. Popularity would come eventually. And when it comes it would stay.

Request a Call Back